McGraw was wearing his typical black cowboy hat and was tanned from one of his recent spear fishing trips. Meacham, a journalist, author and professor, wore a dress shirt and khakis, and held an unlit cigar in his hand. 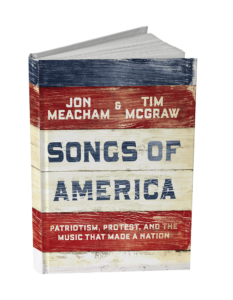 What this “Odd Couple” duo does have in common is a love of history and a new book they wrote together, “Songs of America: Patriotism, Protest, and the Music That Made a Nation,” out on Tuesday. They were in rehearsals for a book tour that’s unlike anything the two of them have done before, a mixture of songs and lectures on American history and culture, starting Monday in New York City.

At McGraw’s house, they laid out copious notes and lyric sheets as they worked through their program, which will include Meacham talking about the book and McGraw singing a few songs that relate to the themes. McGraw won’t be singing any of his chart-topping hit songs on the seven-city book tour, but instead he’ll be covering some of the songs mentioned in the book, even a song from before the Revolutionary War called “The Liberty Song.”

The two took a break from rehearsals to snack on pizza, while Faith Hill, McGraw’s wife, brought over some iced tea. The friendship between the historian and the Grammy-winning country star began when Meacham invited his neighbors McGraw and Hill to a dinner party. McGraw, who had read Meacham’s books on American presidents, was initially shy around Meacham and his friends.

“I remember sitting back in his library and they were smoking cigars and talking about history, politics and current events and it was just really enjoyable to me,” McGraw said.

Seven years later, McGraw said he’s more confident in keeping up with Meacham’s encyclopedic knowledge of history, politics and people. Last year, McGraw asked Meacham if he had ever considered writing about the impact that music has had on American politics. Meacham was surprised that he hadn’t really thought about that himself.

“Believe me, I hate to give him any credit,” Meacham joked, to which McGraw replied, “Especially intellectual credit.”

The book is not an exhaustive list of American political songs — it’s more like a conversation starter. Meacham provides chapters on eras in American history and the songs that defined culture, wars, political movements and campaigns. McGraw offers sidebar reflections on individual songs.

“The whole task with prose is how do you bring it alive? How do you make it visual?” Meacham said.

The book starts with the birth of the country, years before the Declaration of Independence, and goes through the Sept. 11, 2001 attacks and the 2008 election of Barack Obama. The songs cover a wide range of American musical touchstones, from battlefield songs like “Yankee Doodle Dandy” to Choctaw songs and African-American spirituals, to civil rights anthems like “Lift Every Voice and Sing,” to more modern rock and country songs like “Born in the U.S.A.” and “Okie From Muskogee.”

Especially in times of deep political divide, music has reflected the nation’s conflicts. McGraw writes eloquently about the song “I Wish I Was in Dixie Land,” an anthem of the Confederacy, and having to reconcile his memories of growing up in the South with knowing what the song means.

“That song strikes an emotional chord, but intellectually, I know instinctively that song is a racist song,” McGraw said.

Said Meacham: “My view of writing history and biography is, complexity is your friend. And to me what was so interesting about looking at history through the aperture of music was how consistently the music reflects the conflicts of the time.”

But Meacham also pointed to songs that brought people together, such as Brooks & Dunn’s “Only in America,” a song used by George W. Bush in campaign rallies and also played as Obama accepted the Democratic nomination for president years later.

Although they don’t address Trump-era politics, Meacham said they are aware the book is coming out in an “incredibly divisive and partisan moment.”

“I believe as strongly as I believe anything that history and music have the capacity to open hearts and minds in a way that conversations about what’s going on today cannot,” he said.